Featuring, my family and in-laws!  See below for a short bio/sketch. 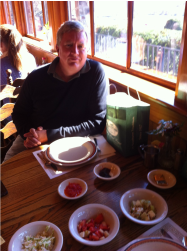 My dad, James Hannon Pound III, commonly known as "Jay" was born at Emory University hospital.  He's the eldest of three siblings: two sisters, Michelle and Joy, and his youngest brother, Jeff.  He went to North Florida Christian high school, where his father was the principal.  His father had a master's degree in geology from Emory and was a working geologist before his career in education.  Dad went on to get a B.S. in Broadcast Engineering at Bob Jones University and a M.S. in Broadcast Management.  He first worked for WCTV in Tallahassee Florida performing daily satellite uplinks for the Florida News Network.  In 1985, he moved to GA to work for Jesse Crawford at Crawford Communications (now Encompass Digital Media), with their satellite dishes as an RF engineer, putting TV stations on the air.  He became interested in computers with his company's purchases of several and gradually migrated into Information Technology.

At Encompass, Dad transitioned to software development and system administration duties to create multimedia training applications for Fortune 500 clients.  After a six month stint at Health Science Media as Director of Videodisc Programming, Dad returned to Encompass to manager multi-user office systems, e-mail and Accounting and tape library databases.  A veteran of numerous IT systems migrations and implementations, Dad transitioned to full time support of Broadcast IT in 2005 to support the implementation of 25 redundant channels of tapeless network origination.  In 2006, Dad wrote workflow software integrating the Massstore digital media archive to Anystream transcoders and the DVIDSHUB.net scheduling system.

In 2007, Dad participated in the development of Crawford Media Services, then beginning in 2009.  Dad played a key role in the implementation of the Atlanta NBC Hub which manages the automation for NBC owned and operated stations in 11 cities.  The NBC Hub also remotely controls Telemundo and digital sub-channels for a total of 37 on-air stations.  Dad continues to provide technical support and implementation for digital content management systems servicing television networks and centralcasting originating in Atlanta.

Dad had two children with Vera Pound, Jessica and James, in 1987 and 1989, respectively.  He's taught Sunday School for many years at Hebron Church in Dacula, as well as run sound and audio for church productions such as the Passion Play.  He has been involved in sound and production at multiple church sites.  I think dad is awesome and totally a cool technology guy.  He inspired James to be equally passionate about computers. He also is responsible for putting a very nice sound system in our living room, complete with bass shakers under the sofa.  He tries to stay on the cutting edge of technology both at work and at home.  Some of his hobbies include Ham radio and photography.  For links to dad's pictures on Flickr, see this link.

Mom was born in New York to Arno and Gertrude Lerch, the third of four kids - Heidi, Reinhart and Susan.  Her parents emigrated from Germany to New York shortly after WWII.  She grew up there until her early teen years when her family moved to West Palm Beach, Florida.  At the age of 13, she became a type I diabetic.  Very little technology was available for diabetics at that time.  At a diabetic summer camp, there was an incident and she almost died, but fortunately was able to get to a hospital in time to recover.

She studied nursing at Palm Beach Community College, graduating with an AA degree, becoming an RN.  She met Jay in Florida and after they were married, moved to Atlanta for dad's job at Crawford.  Mom's fondest wish was to have many children, but due to hard pregnancies with her diabetes, stopped after two - Jessica, her first, and James.  After finding out she had a fatal kidney disease, she chose to stay at home full time and home school her two children, to spend more time with them.  A new medication came out, however, that saved her life.  She continued to home school, enjoying the time she spent with us, and employed us in many home schooling group field trips and activities.  During our middle school years, she and Jay taught Sunday School for several years at Hebron Baptist Church.

When I went to college, she took up nursing again, eventually working in the mother-baby unit of Gwinnett Medical, where she now continues. She enjoys regaling us with the crazy and hectic days that the nurses have in the hospital.  It is quite amazing what they do.  Her biggest hobby is gardening.  She loves planting things and watching them grow, building a small garden and a raised garden in the backyard, as well as planting several fruit trees - apple, fig, pear, peach and a nut tree.  Her garden sports cucumbers, tomatoes, peppers, carrots, beans, squash, catnip, mint and elephant ears.  She enjoys giving her vegetables away to family and friends.

Finally, mom is well-known for her unbelievable determination.  When she sets her mind on something, heaven help the things that get in her way. She replaced the front door frame, googling and You-tubing how to do it.  She also replaced the toilet at Oma's house, even finding a way to make the toilet seat cover fit under the too small counter top.  She had to take it to a shop to have it shaved down to size.  Through her, I've learned stubbornness and it has served me well both in college and now again in grad school.  I'm greatly indebted to my mom for all she poured into me, sacrificed and for her love. 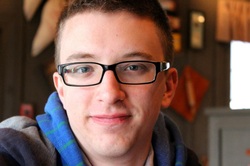 My brother James is an amazing guy.  He was born at Gwinnett Medical in 1989.  He and I grew up spending every moment together as we were home schooled by our parents.  We couldn't have been more different in personality.  James is very spontaneous and carefree, while I am more regimented and serious.  However, spending so much time together taught us how to deal with people of different personalities and by the time we were teenagers, we had become inseparable, best friends.  We did everything together, went everywhere together, sat by each other in church and at youth events and never left each other's side.  It would have seemed weird for us to do so.  It wasn't until I was about sixteen before we did some things separately.

Following dad's footsteps, James has always loved computers.  He grew up on them, since dad started bringing them home from work to tinker on. James soon learned his way around them far better than my mom and I or even dad, in some respects.  He loves graphic arts, game design, web design and some programming.  He currently lives in Kennesaw in an apartment, where he worked at a non-profit organization called The Center for Sustainable Journalism.  He was promoted to their chief web editor for their pages JJIE and YouthToday.org, which he had been working on prior.  He did web development and some editing.  He then worked at a contractor for WebMD, uploading and editing their videos, and picked up another contract with them in the new year.  He married Elizabeth Cuneo April 17, 2016, a very sweet person I am so happy to know. He also started a permanent position with WebMD on their publishing team in fall 2016.  Lots of excitement to come!