Currently, I largely game only in Star Wars: The Old Republic (SWTOR), an MMO-RPG (massively multiplayer online role-playing game).  For what role-playing games involve, see here.  For general information on all things Star Wars, see Wookieepedia, the Star Wars wiki (it is the basis of in-game Star Wars canon from all sources: movies, books and games).

See the bottom of the page for current TOR news section that serves the same purpose as the "what's new" thread on the home page - give you an idea of links and photos that have been added for quick reference (currently somewhat outdated - see enjin page or Gaming Blog instead).

My own definition for it is that RP, or role-playing, is playing out the action and interactions of an in-game character, as if they were an actor on a stage. You do this in-game by having role-play sessions in which people will get together and speak like their characters would, do actions within the game and go on adventures, while pretending to be that character. It's a combination of acting and impromptu writing. It can be a fascinating way to explore character quirks and interactions. SWTOR is the first time that I have done in-game RP. For more info, see the links.

My first guild was a bunch of real life friends from college called "Running with Sabers."  Eventually, they went there separate ways, and I joined the guild The Legion, a primarily RP guild for whom I was ops lead for a while.  My time with them was during the glory days just after graduating from college.  I took a gap year in 2012 and played, did ops, wrote stories, did RP - and it was great.  I left the game when I joined grad school in 2013. In 2015/16 I came back to the game and joined the guild The Seventh Virtue, another primarily RP guild that also did ops.  Finally, that guild parted ways as well, and I was absorbed by The Last of the Guardians, since I started doing fun run ops with them imp side, and they invited me to join their Pub side guild.  My main changed from Culurien (sage) to Rhubix (sage) and Mirusch (sorc) at that time.  I've been with the Last of the Guardians for almost a year now.  Usually, I only log in twice a week on Th (imp) and Friday (Pub) for fun run ops before disappearing again. Occasionally, I also play on the weekends.  It gives me my fix for doing some light ops and helps me relax during the week. 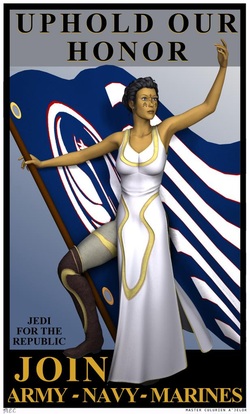 Graphic art for Culurien by Talasa
Note about my character creation:  In games, my main character (Culurien) is most similar to me combined with the person I would most like to be. The others I made as different from each other as possible.  SWTOR was my first experience with RP.  Because of that and my interest in writing, I decided to use my characters to explore different personalities and ideas to "see what would happen":  how difficult each would be to write and how they would interact.

Character summaries in a sentence

Culurien, a Jedi Master healer and ranged combatist, struggles to understand why her family is being hunted while helping out the Republic military, protecting her friends and serving as a beacon of hope to those in need.

Alytheia, a human Commando adopted and raised by Cathars, has made it her life work to find a cure for the rakghoul plague in all its various forms, as well as to hunt down and eradicate it anywhere it is found.

Elenawe is a Jedi Knight rarely taken seriously by the Order despite her mastery of the blade due to her "unconventional style," yet her comical exterior masks a serious purpose and keen insight.<p>

Jagna, an arguably insane demolitions expert and military deserter, lives to prove that she can wage a more deadly war on the Imperials by herself, than anyone in the military can.<p>

L'axad'yis, known only by her code name Dice is a broken ex-cipher agent, medical cybernetist and mathematician, who is unconsciously driven to finish the mission of her dead mentor.

Tec'ans'nuruodo, a double agent for the Chiss Ascendancy within the Empire, joined Imperial Intelligence as part of an Ascendancy watch dog program to determine their trustworthiness as allies - now he attempts to follow his final instructions to extract several other agents and somehow come out alive.

Mirusch, a mysterious and deadly assassin, follows the orders of her unseen master, spying upon Culurien, gathering intelligence, waiting to kill her when the time is right.

*Note on the graphic:  produced by the graphics artist Talasa, a Legion member, based off of a WWII poster.  To view more of her work, see the Legion's Drawing Thread.

*Note: "stories" include separate stand-alone stories in finished form. "RP-threads" are role-play threads with other characters in a more open-ended format that may or may not be finished.

Been working on getting my agent (Tec'ans'nuruodo) and my knight (Elenawe) to level 50 (cap). Both are currently 46.

Wrote some Denova story mode guides off of the swtorextreme youtube video guides (plus some assembled information), available here.